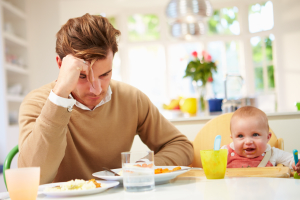 What is Paternal Postpartum Depression (PPD)?

Hormones. While you’ve experience a roller coaster of hormone changes during your pregnancy, your partner has experienced his own as well. During and after pregnancy, men’s testosterone levels decrease and estrogen levels increase.

Stress, lack of sleep, added responsibilities, and a sick or premature baby also play a role in PPD. New dads are worried about finances and worry about how good of a day they’re going to be.

Just like postpartum depression and the baby blues in women, PPD and the daddy blues in men are different. The daddy blues are cured with some extra sleep or an afternoon with a friend. But, if Dad is still depressed after this, it might be PPD.

If Dad still feels depressed after two to three weeks, it’s probably PPD. It’s time to seek treatment by a professional who specializes in working with men. It’s important to pay attention to things that seem out of character, such as constant headaches or stomachaches, increased anger, or alcohol or substance abuse.

Men tend to internalize feelings of depression and to self medicate instead of talking about their feelings or seeking help. If you see these changes in Dad, encourage him to seek treatment.

Pregnancy is one of life’s most miraculous moments and it comes with a million different emotions – for mom and dad. It’s important to recognize these symptoms and seek treatment. Remember, you’re not alone!