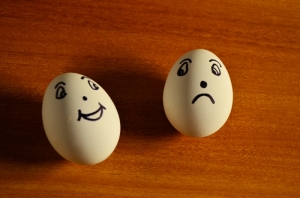 We all experience the ups and downs, good days and bad days, and the occasionally, even, I should never have gotten out of bed day. As a general rule, most of us can get back to an inner calm or a middle ground to which we return.

But individuals with Bipolar disorder experience moods that are extremely different from the day to day vicissitudes of human emotions.

Individuals with Bipolar disorder may find themselves alternating between periods of exuberant elation or mania, when anything seems possible, and periods of deep despairing depression that leaves them in bed for weeks and unable to function in their day-to-day lives.

It can be very difficult finding an accurate diagnosis for BPD because usually only the depressive symptons are reported or acknowledged, while manic episodes can be accepted as fairly normal. Also, the hallucinations and delusions that can occur with full-blown manic episodes can cause a misdiagnosis of schizophrenia. Those with bipolar depression may experience the classic depression symptoms, such as:

Full-blown mania is often associated with reckless or erratic behavior, such as:

Hypomania: Hypomanic episodes are less extreme than mania. Although the person may sleep less, their behavior is typically less reckless than in a manic episode. When the person experiences hypomania, it is easy for the behavior to be mistaken for changes in motivation or productivity, because the person may stay up for several nights and do their work or have a sudden bought of creativity.

Some people with bipolar disorder will experience symptoms of both mood simultaneously, or a”mixed episode”.

What is involved in Treatment of Bipolar Disorder?

Each patient with bipolar disorder is an individual, and requires personalized treatment. If you suffer from bipolar disorder, the best medication regimen for you, will always be the regimen that you and your doctor have concluded is most effective for you, and causes the fewest side effects in your particular case!

Common medications used in treatment of bipolar disorder include:

This form of therapy can be extremely useful in helping manage BPD. A doctor may help uncover the triggers of the bipolar episodes such as high stress or too little sleep, or may assist in changing certain behaviors during manic or depressive states.

Some doctors may recommend ECT as a part of BPD treatment. This treatment has been used with as much as an 80% success rate in temporarily relieving the symptoms of bipolar disorder. The procedure involves the administering of a muscle relaxant and short-acting anesthetic followed by a non-painful small shock of electricity.

Self-Care remains very important in getting and staying well

Self-care is very important in managing bipolar disorder. Treat yourself well by:

As many as 15 – 20% of patients who suffer from bipolar disorder ultimately die after a suicide attempt. Up to 80% of people who struggle with bipolar will consider suicide. It is vitally important to seek treatment!

My name is Amanda Itzkoff, MD. I am a New York City Based Psychiatrist that specializes in Bipolar Disorder and Assistant Professor at Mount Sinai Medical Center.  For additional information about bipolar disorder, depression, or mood disorders email our office at Amanda.Itzkoff@gmail.com . To schedule an appointment, call our offices at (917)-609-4990.