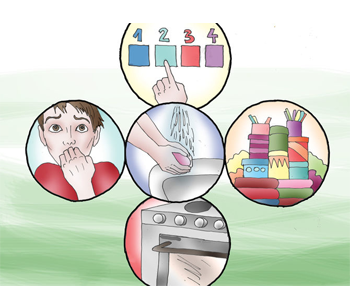 Obsessive-Compulsive Disorder (OCD) is an agonizing mental illness that can be difficult to understand.

It is poorly portrayed in the media, not easily understood from reading the many textbook descriptions available, and commonly misdiagnosed by many psychiatrists, unfortunately, who may be inexperienced in treating OCD.

But, the good news is that treating OCD is possible! In this article I want to discuss the basic facts about OCD and also address some common fallacies.

It is important to know that if you or someone you know suffers from OCD that there are very effective treatment options that are available!

What Is Obsessive Compulsive Disorder?
As the name implies, OCD is characterized by obsessions and/or compulsions. Obsessions are persistent thoughts, impulses, or images that are intrusive and cause distress and anxiety. The brain tends to get “hooked” on a disturbing thought or idea and can’t let go. In order to cope with these unwanted thoughts or “obsessions,” the patient may develop rituals or “compulsions” to minimize or alleviate the mental distress caused by the troubling thoughts. Most descriptions of OCD focus on these rituals or “compulsions” which can be mental or absent (“pure O”). The terribly crippling component of OCD is the negative intrusive obsession.

How Common Is OCD?
A National Institute of Mental Health survey found that OCD affects more than 2% of the population, meaning that OCD is actually more common than such severe mental illnesses as schizophrenia, bipolar disorder, or panic disorder.

OCD can affect anyone, however the typical age of onset is the late teens or early adulthood. It usually appears gradually and becomes more acute during the increased pressure of early adulthood.

Other important Presentations of OCD Include:
OCD that begins in childhood, recedes, and then reemerges in early adulthood.

Postpartum or Perinatal OCD may begin in pregnancy or anytime within a year of a pregnancy, and may often contain thoughts or fears or being a terrible mother or doing physical harm to your baby.

What Are Some Common Manifestations Of OCD?
Keep in mind that every individual will have different idiosyncrasies depending on the particular obsessive thoughts they are having. However, here is a list of some of the more common manifestations of this disorder:

What is NOT Considered OCD?
For example, habits like nail biting, teeth grinding, skin picking, or heavy attention to personal grooming are not considered to be OCD.

Neither are impulsive behaviors such as gambling, alcohol abuse, or sex addiction. OCD does not give the patient any degree of pleasure. These issues deal with impulse control and may be symptoms of other mental health issues, but they don’t signify OCD.

OCD does not include people who like to collect certain items or people that seem fixated on a particular interest or hobby.

Additionally, people with OCD should not be confused with perfectionistic, rigid, “control freaks,” or compulsive individuals who are performance-oriented and are very organized in their work, finicky about their appearance, and highly regimented in their recreational and personal lives.

Generally these types of people like the way they shape their lives. By contrast, people with OCD do NOT like what’s happening and feel overwhelmed by their thoughts and fears and feel “taken over” by them.

Finally, OCD is NOT a personality flaw, and it certainly can’t be treated with discipline or by simply “stopping” these thoughts. Most patients in fact realize their thoughts are irrational…which actually tends to further increase the agony of the condition.

When Should Someone Seek Treatment?
If you or someone you know relates to any of the symptoms listed above, it is wise to seek treatment from a licensed healthcare professional.

To further simplify the issue, if you or someone you know frequently experiences thoughts that are intrusive, unpleasant, and produce a high degree of anxiety, and you find yourself engaging in avoidance or anxiety-reducing behaviors, it is best to seek help from a mental health professional as soon as possible.

What Are The Treatment Options?
First and foremost, every patient is unique and has different needs and a different ideal treatment plan. That’s why it is so very important to work with a specialist who truly understands OCD.

Beyond that, the best course of action is typically the combination of pharmacological and behavioral treatments. This combination has been shown to reduce obsessive thoughts and bring compulsive behaviors to a manageable level.

Two behavioral interventions (Cognitive Behavioral Therapy and Exposure Response Prevention Therapy) have been shown in numerous studies to be most effective in the treatment of OCD. The positive results of these interventions are typically boosted with medication.

Again, it’s imperative that you work with a highly skilled and knowledgeable psychiatrist who can help you find the proper combination of treatments.

For additional information about OCD or other mental health issues, please feel free to email our office at Amanda.Itzkoff@gmail.com.