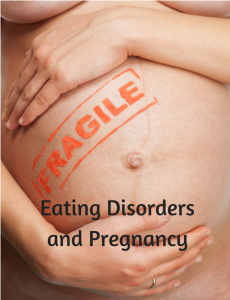 Women who are actively struggling with Anorexia, Bulimia (binging and purging), or Binge Eating Disorder should work with a qualified psychiatrist to achieve remission. If you’re interested in starting a family soon, and are not receiving treatment for an active eating disorder, this is a great time to seek out care!

Many women with active eating disorders will struggle to conceive. Low BMI or weight that is less than minimally normal, as seen in Anorexia, can and often does result in disruption of the menstrual cycle, or cessation of menstruation and ovulation, leading to diminished likelihood of conception. Elevated BMI, commonly seen in women who struggle with Binge Eating Disorder and less common but also prevalent in women who suffer from Bulimia Nervosa is also known to reduce rates of conception.

While starting a family can be a very joyous time for women, it is important to understand the risk of eating disorder exacerbation in pregnancy, as well as the risk of perinatal mood and anxiety disorders. Pregnancy brings about physical and emotional stress. Stressors that arise during pregnancy include financial concerns, concerns about adopting a new role as a mother, as well as concerns about romantic relationships and partner support, among many others. Pregnancy is a risk factor for developing a postpartum mood or anxiety disorder, which will begin during pregnancy, in 50% of cases. For a woman struggling with an eating disorder, the concerns about body image and weight gain during pregnancy will be triggering. Eating disorders are frequently comorbid with other psychiatric illnesses including depression, bipolar disorder, anxiety disorders, and substance use disorders. This means that many women who are receiving treatment for an eating disorder, and may need to be started on medication to achieve wellness, will also have higher likelihoods of being prescribed psychiatric medication for treatment of depression, bipolar illness, an anxiety disorder, or addiction. The same women will be at increased risk for mood or anxiety exacerbation during and after pregnancy, including postpartum depression, which can have devastating results, including maternal suicide. Maternal suicide exceeds the hemorrhage and hypertensive disorders as a cause of maternal mortality.

If starting a family is something you’re looking forward to soon, and you are suffering from an active eating disorder, your ability to become pregnant, stay healthy through a pregnancy, and give birth to a healthy child will all be positively impacted by addressing an eating disorder with a reproductive psychiatrist before you begin attempting to conceive.

How does an active eating disorder affect maternal health?

The risks to a pregnant woman with an eating disorder include:

Also keep in mind the risks to the baby if you have an active eating disorder during pregnancy:

Once I have worked with my doctor to achieve remission of my eating disorder and other psychiatric symptoms, what are my next steps?

The risk of each medication prescribed should be reviewed, with respect to pregnancy outcome and risk of adverse effect to the child. This should be weighed against alternative medications, that may be safer or have better known safety profiles during pregnancy, as well as the risk of stopping a helpful medication.

Some women will be able to taper off of medication, and will have success in treatment with psychotherapy alone. Others will taper off some medication, but will require some medication be continued, or transition to medication that is better researched in pregnant women, to maintain the mental health necessary to succeed in achieving, maintaining and mothering a healthy child.

Your reproductive psychiatrist & obstetrician will counsel you about how long after medication changes you can safely attempt to conceive.

What if I cannot maintain mental health upon tapering medication, or without the support of a medication that is contraindicated in pregnancy?

There are women who may very legitimately fear stopping medications that may have literally saved their lives. Other women may attempt to taper medication that is contra-indicated in pregnancy multiple times, only to find that severe symptoms including dangerous behavior or suicidal ideation returns each time. No woman should be forced to choose between being pregnant and suicidal, or forgoing motherhood altogether.

If carrying a pregnancy would not be a healthy option for you, your reproductive psychiatrist will be ready to discuss additional options for expanding your family that are acceptable and safe for you, including third party reproduction and adoption.

Women who struggle with eating disorders will often have special considerations surrounding conception and pregnancy. While some women will be managed with psychotherapy alone, others may be best treated with medication and psychotherapy or other modality. Talk to your psychiatrist about the right treatment for you.  If you currently take medication to manage your eating disorder and/or comorbid illness, a reproductive psychiatrist can review the safety, risk, benefits and safer alternatives for your care during pregnancy, as well as additional options for expanding your family.

For additional information about eating disorders or psychiatric illness in pregnancy, email Dr. Amanda Itzkoff at Amanda.Itzkoff@gmail.com. To schedule an appointment, call our offices at (917)-609-4990.